Watch the video and read the original article at CBC.ca

Below is a copy of the original article

After a two-hour hike in Stawamus Chief Provincial Park, Brent Plumley looks out over a sheer drop, estimating it’s about 275 metres down to the rocks below.

In case of a fall, it would be “long enough to think before you hit the ground,” he says with a laugh.

Plumley is part of a crew of people who routinely gather to practise highlining, a sport that takes the lofty altitude of tightrope walking, throws in the up-and-down bounce of trampolining and adds the side-to-side action of slalom skiing.

If you have a fear of heights, highlining is definitely not for you.

The basic premise is to take a piece of nylon webbing a couple of centimetres wide and string it between two points. In Plumley’s case, the line runs over a rocky gorge high in the mountains of British Columbia.

Plumley and his crew secure ropes and nylon webbing to a series of anchors drilled into the rock. Although it looks somewhat flimsy, they make sure there’s lots of redundancy, with extra anchors and a safety line.

But even a seasoned highliner like Plumley can be given to second thoughts, especially on a blustery December day. 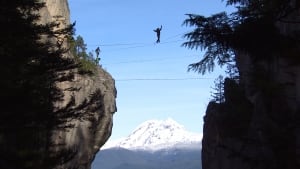 These highlines in B.C.’s Stawamus Chief Provincial Park are up to 40 metres long, and an exhilarating 275 metres above a gully. (Chris Corday/CBC)

He says that every time he steps out onto the line, “my heart sinks, my hands shake. It takes that getting over it, and the more you do it, the more comfortable you get and the more fun you start having.”

Alongside Plumley on this day is Spencer Seabrooke, one of Canada’s most accomplished highliners, who acknowledges that he and the crew “might be of a specific mindset,” but insists “none of us are crazy.”

Looking down at the rocks below, an observer might beg to differ.

Roots of the sport

Highlining — and its lower-altitude version, slacklining — started in the Yosemite Valley in California.

Seabrooke says it was created by bored rock climbers messing around with their gear and creating impromptu tightropes.

“It really is just a bunch of hippie rock climbers and dirt bags just committed to living life to the fullest.”

Seabrooke and his fellow highliners are hoping to spread the thrill of this sport to others. They routinely stage demos and welcome newcomers.

Krista Cawley is still learning the ropes, so to speak. She started highlining several months ago, and claims it has a zen-like quality. 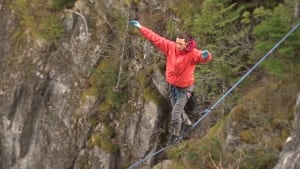 The highliners say the sport may look extreme, but their industrial strength equipment ensures their safety. (Chris Corday/CBC)

“It teaches me things about myself. It’s oftentimes scary and just to get out on the line and experience something new, walk, take a step, you know, fall down, pull yourself up again — it’s been really rewarding, a cool process.”

Highliners are typically roped in with a safety harness, but Seabrooke pushes things further than most. If conditions are right, he walks the lines without a safety harness — meaning that if he falls, he dies.

His one last hope in the event of trouble is to do a controlled fall, grabbing the line on his way down to avoid tumbling into the rocky void.